A Ripe Time for Environmental Justice 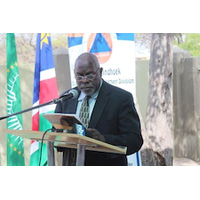 From a young age in his Roxbury neighborhood of Boston, Neil Boyer noticed connections between poverty, violence, health and zip codes. Those observations led to his early work in economics, and ultimately, a passion for environmental justice.

“I remember walking with my elder brother and observing local dynamics, maybe two streets from my house,” said Boyer, a former volunteer and current Peace Corps Program Specialist for the Environment in Washington D.C. “You would see these contradictions between the suburban areas where I attended high school and the neighborhood where I lived. Why are there so many negative socio-economic indicators in this community, and not others? Why are some areas poorer than others? What accounts for these differences?”

After serving as a water sanitation volunteer in Benin and Togo from 1981 to 1983, Boyer later studied food and resource economics, then worked in several African countries for USAID, the United Nations and various nonprofits. Over the decades, he’s overseen a wide range of projects dealing with rural development, organic agriculture, reforestation, HIV, poverty reduction, gender equality, mine contamination, and marine ecosystems.

Now based in Washington D.C., in his spare time he supports local climate justice issues in his community: tackling food deserts and malnutrition in historically marginalized neighborhoods; and promoting the creation of urban orchards. Those are the green projects. He’s also done lots to combat the health effects from what he calls “brown stuff,” environmental pollutants such as those found in South African gold mines, or arsenic contamination in communities near copper smelters in northern Namibia, and more recently, lead and mold in local D.C. rental housing. All these smaller tasks form part of a larger mission.

“When we talk about climate change, first and foremost

we are talking about saving humanity.”

“To say save the planet isn’t really accurate, because short of getting hit by an asteroid, the planet will still be here in five billion years. There may be different kinds of species, whether they are worms, roaches or bacteria,” Boyer said. “When we talk about climate change, first and foremost we are talking about saving humanity. You can’t save humanity if you have no air to breathe, if you’re chopping down all the trees, killing all the pollinators, or temperatures are too hot for pollinators to breed, or if you have no fresh water.”

Here, he tells his story, and gives sage advice on how RPCVs can make a difference in the battle for climate and environmental justice. The views expressed here are his own personal perspective, and not necessarily those of Peace Corps.

Boyer’s professional interests stemmed from early experiences growing up in Roxbury, one of the more historically marginalized areas of Boston. The city of Boston on its website now describes Roxbury as a “historic neighborhood,” and “the heart of Black culture in Boston.” It was also home to well-known African American leaders such as Malcolm X, and Crispus Attucks, an original New England Patriot killed by British forces in the 1770 Boston Massacre, as well as David Walker, whose famous 1828 speech called on slaves to organize and rise against slavery.
In the racially polarized era of the 1970s, Boyer attended an all-male, mostly white suburban Jesuit high school, where he was one of a handful of black students. He later attended Northwestern University, where he studied economics, African studies and Swahili. There, he took courses with resident international scholars such as the late Dennis Brutus, South African poet and activist, and the late Ibrahim Abu-Lughod, a Palestinian intellectual, who helped him see the world from the perspective of the global South.

Next came Peace Corps from 1981 to 1983, first in Benin until the group was evacuated due to safety issues, then Togo.  “Peace Corps can open your eyes. Working with water sanitation . . . you start seeing issues of poverty and class, gender, resource allocation,” Boyer said.

“Peace Corps can open your eyes. Working with water sanitation . . .

Just shy of two years, his service as a volunteer was interrupted when he was medically evacuated due to reactions chloroquine. After Peace Corps until the late 1990s, Boyer pursued graduate studies in the U.S. and Britain, worked with nonprofits in several African countries, and taught agribusiness and economics.

From 1997 to 2002 he served as Associate Peace Corps Director (APCD) for Rural Development in Lesotho. That’s where the links between development, environment and climate required a more holistic approach.  Lesotho volunteers noted challenges in mobilizing community support for their rural development and tree planting interventions while many locals succumbed to HIV, with funerals nearly every weekend.

Boyer set new targets: working with community leaders and local health providers to reduce HIV infection rates. They promoted messaging on safer sex and dissemination of condoms, first to young women most at risk. However, for cultural reasons and the prevailing social stigma attached to HIV, many of the women suggested that men should be targeted as well. To sell this idea required male role models, so volunteers then focused on Basotho men employed in the gold mines of neighboring South Africa. Joining some of these men as they drilled for gold ore a mile below the surface, Boyer soon realized the miners’ hazardous working conditions led to severe respiratory ailments. “I was told by the miners that if you were to smoke a cigarette in some of the mine shafts underground, the cigarette smoke would turn blue with all the toxic chemicals in the air,” Boyer said. 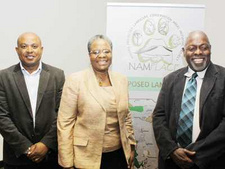 After Lesotho, Boyer worked for USAID in South Africa from 2002 to 2003 on the economic consequences of HIV and AIDS, land reform and organic agriculture.  Then he joined the United Nations Development Program for nearly 13 years, working in Gambia, then Swaziland, and finally Namibia. He led policy discussions and program interventions in environmental sustainability, poverty reduction, gender equity and economic empowerment for women. In those efforts, the connection between economic and environmental scarcity grew increasingly clear, as droughts worsened while population and migration to urban areas skyrocketed, creating shantytowns with inadequate sanitation and infrastructure.

“If I can no longer make a living growing food because there’s no rain, or if there’s no rain for two or three months, after one or two crop failures, maybe I sell my goats, or my cows, or whatever,” Boyer said. “If you don’t address climate change, you’re going to have increased resource scarcity, less water, less arable lands, and reduced means of generating a livelihood in rural areas. Population change just reinforces this cycle, this drain on resources, generating increased conflict, greater migration, and so on.”

And now, the United States is seeing similar migration patterns. “We have climate refugees, wealthier people who lived in beach front views with ocean vistas, but as sea levels are rising, many of these houses are becoming uninsurable with the increased frequency of flooding. Now they are buying property in higher elevated areas,” Boyer said. “And with the wildfires in the West, where do those people go? Insurance companies are unlikely to pay for rebuilding new houses every other year or continuously bail out homeowners in these high risk areas.”

“We have climate refugees, wealthier people who lived in beach front views….

And with the wildfires in the West, where do those people go?”

So what can RPCVs do here and now in their own communities? Do what he did when he moved to Washington D.C. Scope out local environmental issues, and start with small steps. Problems could range from lead in water or incinerators burning plastics, to childhood asthma from pollutants or malnutrition from lack of nearby grocery stores.

“Just Google (to find) some of the environmental justice issues,” Boyer suggests. “Start in your neighborhood. Chances are there’s somebody doing something, from recycling to urban gardens, composting, buying fair trade products, to just writing a letter to your councilor, alderman, congressperson. It could be the Sierra Club, NAACP, local environmental organizations. The challenge we always talk about in Peace Corps is sustainability. It isn’t like folks have to jump in with both feet to save the world. You do what you can when you can.”

“The challenge we always talk about in Peace Corps is sustainability.

It isn’t like folks have to jump in with both feet to save the world. You do what you can when you can.”

When Boyer moved to Washington D.C., he had never lived there before. After identifying local issues, he now chairs the local branch of the NAACP Environment and Climate Justice Committee, and is member of the city Attorney General’s Environmental Stakeholders Office and the Air and Climate Public Advisory Committee of the Metropolitan Council of Governments.  With these groups, he collaborates with community residents and advocates to promote and implement ordinances that hold landlords accountable for air quality, mold and contaminants. Another effort aims to improve local nutritional outcomes by promoting urban fruit tree orchards into the city’s tree canopy initiative.

“If we improve our tree canopy, it reduces the negative effects of heat islands generated by climate change, and it improves air quality as well,” Boyer said. “It also promotes nutrition, creating vehicle to educate local parents, children, on environment and nutrition because you’re growing apples and peaches in their communities.”

While individual action is important, Boyer said bigger structural changes are also needed, such ending subsidies of fossil fuels, and harnessing technology to eliminate plastic waste and contamination in oceans. “If we can send a rover to Mars, surely we can develop a packaging material from non-petroleum-based biodegradable materials,” as some countries already have.

But greening our nation’s economy must be done carefully. For example, precious metals needed for renewable energy, electric cars or cell phones here must be mined without causing pollution and environmental degradation elsewhere. “We have to make sure that we don’t promote a green America at the expense of a ‘brown rest of the world.’ We should applaud the decisions of U.S. car manufacturers to develop a wide variety of affordable electric cars by 2035. However, if these cars are being powered by batteries that use cobalt or rare earth metals coming halfway around the globe, those communities in Democratic Republic of Congo or elsewhere in the global South (cannot be) devastated and poisoned at our expense.”

One thing is certain, the time couldn’t be any riper for action as the consequences of climate change become more glaring.  “From the forest fires in the West, to the storms in the Southeast, to the increasing incidence of pathogens we’re exposed to, to the heat waves that come with increasing intensity year after year, raising morbidity and mortality rates for many who don’t have access to A/C, especially our elderly populations who may be living on fixed or low incomes--these are the tangible manifestations of climate change,” Boyer said.

The recent coronavirus pandemic and proliferation of viruses over the last 15 years such as Zika, Ebola, Severe Acute Respiratory Syndrome (SARS), and Middle East Respiratory Syndrome (MERS) show how viruses are “jumping the species barrier” from wild to domestic animals because of loss of habitat.

“You can argue that the polar bears are the canary in the coal mine. But I would argue something else,” Boyer cautioned. “The reduction of flora, fauna and habitats puts us on a collision course with an ever increasing number of viruses. It’s only a matter of time before there is another virus which may be deadlier than COVID.”

For information or to help with urban orchard efforts in many cities across the country, visit The Giving Grove at https://www.givinggrove.org/.

Maureen Smith Martindale is a journalist and former Peace Corps volunteer who served in Cameroon from 1987 to 1989.