In the high Andes of southern Ecuador, like every other spot on Earth, climate change is real. It is unpredictable, complex, and we didn’t see it coming. Here, in this small place, people see the necessity of addressing the problem in a variety of ways.

Wayraloma is a steeply sloped area along the Cañar River that winds its way toward the Pacific Ocean. The name combines the Kichwa word wayra, meaning wind, with loma, Spanish for hill. In this area, corn crops have been lost frequently when the plants are flattened by wind howling up the ravine. The particular project that we are looking at is an area of about 14 hectares of land mostly not suitable for crops. At the time of government agrarian reform in the late 1960s, agricultural cooperatives were formed to administer the lots and pay the agency for the land. The Guayraloma Cooperative membership decided to plant non-native eucalyptus trees and a few pines, assuming trees were good. Throughout the dry season children carried water from the river daily to ensure the plants survived. Other area cooperatives also voted to plant groves, but many did not follow through. The Guayraloma forest seemed a stunning success.

However, by every other measure, the forest has done more harm than good. Although eucalyptus have gained fame in forestry projects, in this case the trees caused soils to become impoverished and dried out. Eucalyptus trees drop shreds of bark and leaves that do not easily decompose nor add biomass or carbon; but do stop competing native plants from emerging. Besides, the quality of the wood is poor. Firewood is about its only use at a time when most people are switching to gas. Given that conclusion, the community created a detailed plan to shift to other plants.

The fourteen hectares is a small area, but it has great potential for a carbon sink to remove carbon from the atmosphere and store it in the soil. That is one way for it to contribute to climate change mitigation. This will be accomplished a hectare or two at a time over the next eight years. And I am involved like a Peace Corps volunteer all over again. But the community itself designed, initiated, and will carry out the project. My role is to seek technological and financial backing. I am not alone in this, but a part of the community team. I am like a long-distance Peace Corps Volunteer. Electronic communication has advantages and disadvantages, but we can say it is the next best thing to being there.

“I am involved like a Peace Corps volunteer all over again. But the community itself designed, initiated, and will carry out the project …

We are transforming this grove we planted 50 years ago into a forestry project with no trees. Trees are not native to the area and do it no favors. The native plants are bushes, cacti, agave, and grasses. These add nutrients to the soil and restore balance, as well as biodiversity which is so vital for soil, plant health and ecological resilience.

The grasses will nourish native animals. Currently, farmers are running cattle on the area which are poorly adapted for this high spongy land. Instead, the association will add well managed herds of alpaca and llamas to add wool supply for local artisan weavers carrying on traditions and supplying goods for the tourist industry. They will also supply meat and leather as part of the circle of life. This communal land can also be used for breeding and herd improvement programs. A well-prepared community alpaca specialist is ready for work.

Agave grows naturally here and is a native plant. It holds the soil, adds carbon, stores water, and provides shade for other plants and animals to live around it. Cultivating agave also has an economic advantage. Domestically its sweet liquid is used to make a drink called chawar mishki, or sweet agave, a mealtime favorite, but not a marketable product. New products are being developed for the markets with assistance of researchers at the University of Cuenca, not far from Guayraloma. These products will bring income for the association and help finance the project. The project site will also be used for agave improvement with experimentation and education programs to assist farmers in establishing better agave cultivation on their own land. The soil will heal, be restored, by being host to agave instead of eucalyptus.

Several native varieties of cactus grow freely here and provide needed diversity as well as water storage in this time of unpredictable precipitation. Plus, the fruit is delicious. Cacti, like agave, do not lose moisture during the daylight hours and are able to thrive during increasingly common prolonged dry spells.

Many types of native bushes will also promote and support biodiversity and provide leaves to feed wildlife (unlike eucalyptus) and shade. These native plants also contribute to soil health. However, we cannot prove how much they add at this time. One bush that will be added is broom. There is evidence that this plant with its yellow flowers was once common in this part of the Andes, so would adapt well to being reintroduced. This plant also is also a nitrogen fixer, and bees love its flowers. We need bees.

One of the economic advantages of this project is honey. The University of Cuenca is assisting with the establishment of apiculture, much needed in this area, not only for pollination, but for a growing honey market. Honey also would complement the production of quinoa and amaranth products in local and regional markets. The project site will also support education programs to help farmers develop beekeeping on their own land.

capable of bringing down and storing carbon in this small area,

it will also economically benefit the association and its members.

Overall, the Restorative Forest of Guayraloma will not only establish a naturally well- balanced ecosystem capable of bringing down and storing carbon in this small area, it will also economically benefit the association and its members. At this time, the economic advantages are negligible. Increased income and development of beehives, agave, and broom for local farmers would assure that the project be continued and encouraged. This project would be productive far into the future, for generations to come. The project site will look like it did for centuries in the past while it also fights climate change in the future.

And the eucalyptus and pine trees? They will be removed at the rate of a hectare a year and be used for such things as fence posts, firewood, and other miscellaneous projects. They are useless for much else. This also reduces the forest fire danger. The local farmers don’t want another one of those.

To monitor the advantages, careful accounting will be carried out. Also, the association is already making arrangements to measure the soil organic carbon present in conjunction with technicians at the University of Cuenca. These tests will be repeated in the future to show the progress, hopefully, in years to come. I have already sent a description of the project to an organization called “4 per 1,000,” an international initiative aiming to increase soil carbon content and reduce greenhouse gases. Experts there evaluated the plans and said the project would likely be effective in adding soil carbon, but still lacks proof. I will share their recommendations with a scientist at Mushuk Yuyay, a democratically organized association of small farmers. Another environmental planner in Ecuador will also consult with the association as we go.

We look forward to progressing with this project and have already begun to clear trees and increase the agave plants. As with every Mushuk Yuyay project, it will proceed slowly and carefully with constant re-evaluation as it moves forward. I am always ready to share more information and news, answer any questions and receive any suggestions.

Little by little, a step at a time, looking forward and backward, the restorative forest (with no trees) of Guayraloma will become reality. Of course, there will be a price tag. Patiently, funds are being sought. But this investment will pay off in many ways. The soil organic carbon, biomass, and resilience can be measured and documented. Working together, with hoes, axes, and machetes in hand, the community will make this an economically self-sufficient project within ten years, and an example that can be replicated throughout the region.

Note: According to recently standardized Kichwa spelling, wind is spelled wayra. However, the Spanish influenced former Quichua spelling guayra is still the legal spelling of the place name. 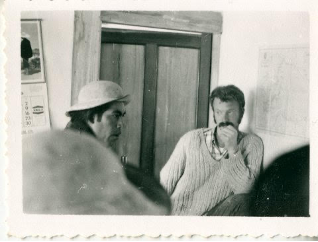 Alan Adams served as a Peace Corps Volunteer in Ecuador, 1967-1969, during a government agrarian reform program. In 2013, Nicolás Pichazaca, the administrator of Mushuk Yuyay, asked him to resume his work with the Kichwa Kañari community. This timely invitation came just as Alan was retiring from his 40 year teaching career. Alan was honored, and gladly accepted the challenge to support the community initiatives being developed by Mushuk Yuyay.

Photo: Alan spoke with a local in Ecuador in the late 1960s.