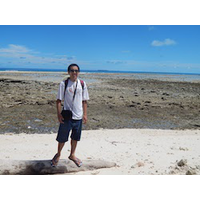 Kiribati is a nation made up of low-lying islands in the central Pacific Ocean. As a Peace Corps Kiribati Health and Community Development Volunteer, I saw firsthand how climate change is already having a harmful impact on people’s lives. When a group of nurse trainees and I conducted a water and sanitation survey in the village of Ewena, we found that more than half the households had wells with brackish water. Because of climate change and the rise of the ocean, saltwater was intruding into the freshwater supply in our village, as it was around our island and throughout the country.

I have returned to visit Kiribati several times after my close of service in 2008, and I have seen that the groundwater problem has gotten worse. Fortunately, people are able to get drinking water from rainwater tanks. But they still rely on brackish water for bathing, washing, and other daily tasks. And if the tanks go empty during prolonged dry periods, people are forced to walk long distances to find freshwater wells. What will happen when those go brackish, too?

In addition to decreasing the freshwater supply, climate change is harming chief sources of food in Kiribati. When I visited in 2014, my former supervisor, who works for the Ministry of Social Welfare, told me that the saltwater intrusion and its effect on the soil are hurting plants. In particular, they are affecting the staple crops that people depend on, including taro root, breadfruit trees, and coconut trees. What will happen when these crops stop producing? 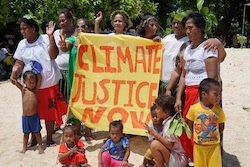 Because of the impacts of climate change, it is likely that the people of Kiribati will have to leave their homes. But there is no high ground on a coral atoll that’s only a few feet above sea level. The people of Kiribati - who welcomed me as a member of their family and who became members of my family when I got married there - will have to leave their islands. But they have nowhere to go. What will happen to their existence as a nation and to their beautiful culture?

is not just a phenomenon that may cause problems in the future - it is hurting people right now.

The Third Goal of the Peace Corps is to help promote a better understanding of other peoples on the part of Americans. I believe it is my responsibility to help Americans understand that climate change is not just a phenomenon that may cause problems in the future - it is hurting people right now. I consider it my duty to raise awareness of the challenges that the people of Kiribati face, and to advocate for actions to address these challenges.

We need policymakers to take action and we should vote for those who will. When deciding how to cast your ballot this year, find out what candidates think about the Climate Displaced Person’s Act (H.R.4732 and S.2565). Learn where they stand on climate change and immigration in general. Ask them what their priorities are. We need leaders who see that action on climate change is not just about science or politics - it is about recognizing our common humanity and striving for just solutions for our neighbors around the world.

Brady served as a Peace Corps Health and Community Development Volunteer in Kiribati from 2006-2008. Brady is Co-Chair of RPCV4EA’s Peace Corps Action Team initiative with Citizens Climate Lobby. In addition to being involved with RPCV4EA, he volunteers with Citizens’ Climate Lobby, Sierra Club and Rochester People’s Climate Coalition, while also working to raise awareness of climate change migration.