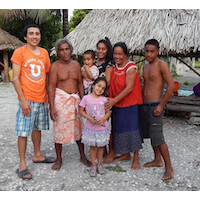 The injustice of climate change is that the people least responsible for it are the people being most negatively impacted by it. People around the world who have lower incomes and fewer resources have contributed far less to the greenhouse gas emissions driving climate change, yet they are the ones forced to deal with the harshest effects of our changing climate. For many people, migration is becoming the most effective way to adapt to climate change. To achieve climate justice, we must facilitate this migration.

The people of the Republic of Kiribati are some of many around the world who deserve the option to emigrate from their country to adapt to the impacts of climate change. As a Peace Corps Health and Community Development Volunteer in Kiribati from 2006 to 2008, I observed how climate change is already harming these islands and their people. One project I worked on with medical workers in our village of Ewena was a household water and sanitation survey. After visiting every household and collecting various information, we were alarmed to find that half of the households had brackish wells.

Across the 33 islands of Kiribati, brackish wells are becoming more common, as the rising ocean leads to saltwater intrusion into the freshwater lens. Sea level rise is also decreasing the production of foods that people depend on: taro root, breadfruit, and coconut. And the king tide floods that happen twice a year cause increasing damage to people’s homes. Meanwhile, the ocean continues to rise.

The I-Kiribati are the friendliest, most welcoming, and most generous people I have ever met.

And they burn the least amount of fossil fuels in Kiribati than anywhere I have ever seen.

Yet these are the people whose country could be lost completely due to the impacts of climate change.

This is climate injustice.

Although no one deserves to be displaced by the impacts of climate change, we must recognize that some people will have to move (and many are already moving). We must have national and international policies that facilitate climate migration. We must facilitate migration that is safe and orderly, which will benefit both the migrants and the places they are migrating to. We must support climate migration if we want to achieve climate justice. 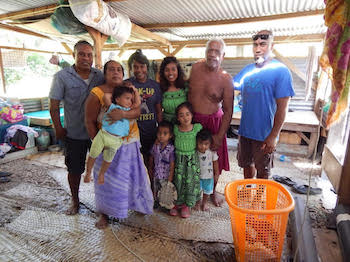 Brady's family in Kiribati during a visit in 2018

Brady Fergusson (RPCV Kiribati 2006-2008) is a member of the RPCV4EA Leadership Team and co-leads the RPCV4EA Peace Corps Action Team.