What's cooling your groceries could be heating the climate! 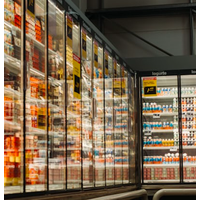 If you think gasoline is the most potent emitter of greenhouse gasses, think again. By the gallon, hydrofluorocarbons (HFCs) used in refrigerators and air conditioning are thousands of times more powerful than gas. Your local grocery store may be leaking as much greenhouse gas per year as about 330 cars.

Major HFC pollution from leaky refrigerators of United States grocery stores results in about 45 million metric tons of greenhouse gases per year, the equivalent generated by 9.5 million cars, according to Leaking Havoc, a report by the non-profit Environmental Investigation Agency (EIA). Aldi’s has the cleanest record, while Walmart, Costco and Trader Joe’s rank far behind. The leaks may slip through faulty piping or seep out during improper installation or disposal.

Fortunately, HFCs will be largely phased out and more regulated over the next 15 years under the  American Innovation and Manufacturing Act, a law passed in December that authorizes the Environmental Protection Agency (EPA) to reduce them by 85 percent by 2035. You may remember the HFC relative, chlorofluorocarbons (CFCs), which were banned in 1976 after causing damage to the ozone layer.

In the meantime, there are many steps you can take to help curb the impact of HFCs on global warming:

·      Shop at a grocery store with a higher climate-friendly score.

·      Tell Walmart to reduce HFCs in this petition by greenamerica.org.

·      Ask Trader Joe’s to adopt sustainable practices in this action by climatefriendlysupermarkets.org.

·      Purchase an HFC-free appliance that uses an alternative refrigerant.

·      Listen to the recording of the recent RPCV4EA Leaking Havoc Webinar.