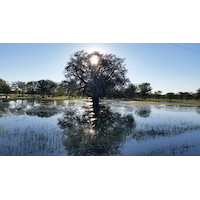 It is raining. “Finally!” I think. “I can't believe how much I missed it.”

As an Oregon kid, I know rain. Most my life had clouds and drizzle. Going to Namibia was a big change. It is a country known for its deserts, and rain comes very rarely. It took nearly half a year of living there before I saw my first African rain, but when the rain came it came in a big way. Big fat droplets of water tumbled out of the sky crashing into my tin roof creating a cacophony of sound. I stood in my doorway watching the world transform. My host siblings ran outside in excitement but then retreated to shelter. It doesn't rain very often so when it does the kids go crazy.

It also usually doesn't rain for very long. After 30 minutes of heavy downfall the rain finishes, leaving behind a flooded world of water. The warm sands of the homestead I live on are covered in large shallow pools of water we call oshanas. The oshanas are beautiful. Under the sand there is a layer of clay that my region, the Omusati region, is famous for using to produce bowls. The clay prevents the water from draining so my village turns into a temporary ocean. Over time, some of the oshanas drain into larger oshanas at lower elevation. But even then, unlike the lakes of America, these pools are shallow and cover areas the size of fields. The oshanas are clear, filled with warm rainwater.

After the rains the oshanas are pleasant to walk through, and it is necessary to walk through them since they cover the roads of the village. The clear water of the oshanas reflects Namibia's clear skies and beautiful sunsets. Over time, life begins to grow in the oshanas. Grass grows in the pools. Snails, frogs, and fish come out of hibernation and leave their burrows in the sand to swim in the warm water. Egrets, goliath heron and other migratory birds flock to the oshana pools.

Rain is normally a gift to farmers in Namibia,

but more and more frequently there are years where it is a curse.

My first year in Namibia though, the rain did not stop. For weeks we had occasional showers, causing the oshanas to overflow. Rain is normally a gift to farmers in

Namibia, but more and more frequently there are years where it is a curse. The roads became flooded and the school was closed, but the real damage was to the crop, our muhangu. After the first rain, my family planted the muhangu seeds as they do every year. Normally it will only rain 4 or 5 times so it is important to get the seeds into the sandy soil as soon as the rains begin. The rains didn't stop though and soon much of our crop was drowned, buried under too much water.

Flooding is not the only issue on the rise in Namibia. The increased frequency of drought is a far more dire threat for this desert country. My first year back in the states the unthinkable happened, it did not rain in the village. Across the region crops failed, grass didn't grow and the mopani trees did not grow their leaves. My family had enough muhangu flour in storage to last through the drought, but their cows and goats had nothing to eat. For the subsistence farmers of my village, a season of drought is devastating.

For the subsistence farmers of my village, a season of drought is devastating.

Unfortunately, drought years and flood years are becoming more and more common as weather extremes become more and more frequent. The threat of increased global temperature is very real to a desert country like Namibia that already relies so heavily on the infrequent rains that come. I have never met a Namibian who has denied the threat of climate change. We have all seen the impact first hand. Despite their awareness of the danger, there is little Namibia can do to address the threat of climate change. They are a small country with a small green house gas footprint. The polluters of the world must step up and address the climate, chief among them the United States.

The European Union and Canada have recently shown the way forward to a global solution on climate by passing recent legislation putting a price on green house gas emissions. A price on carbon, such as the Energy Innovation and Carbon Dividend act, is perhaps the simplest, largest first step to addressing pollution. It creates a fair incentive for polluters to reduce their emissions and the funds collected from the fee can be returned to citizens in the form of a dividend, helping low income citizens recuperate the cost of going green. Legislation like this is essential in making a clean future for the whole world.

I want the floods and droughts in Namibia to be a thing of the past, but unfortunately they will be an all too common part of its future. Together, we can work as a world to change that.

Dylan Hinson served as an English and Science teacher in Peace Corp Namibia from 2016-2018. He now works as a data scientist in Ashland, Oregon and volunteers with the Southern Oregon chapter of the Citizens Climate Lobby.