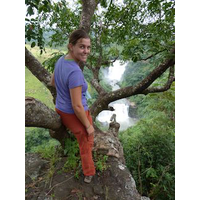 Cover photo: Brittany Williams views one of many breathtaking waterfalls in the Fouta Djallon region of Guinea.

When it comes to slowing deforestation in tropical woodlands around the planet, you might say Brittany Williams of World Wildlife Fund (WWF) helps others see the forest for the trees.

A former Peace Corps agroforestry extension agent in Guinea, Williams is now a forests and climate senior program officer for WWF, an international nonprofit that helps communities conserve needed natural resources, build sustainable markets and policies, and protect and restore species and habitats. Although her focus is international policy, she shared many ideas for how ordinary citizens can help.

“Deforestation needs to be stopped as quickly as possible,” said Williams. “Cutting down those trees and emitting those gases is irreversible in terms of climate change.” This destruction has had a huge impact since forests help regulate climate and water, and along with oceans absorb most of the carbon dioxide produced on the planet.

Taking action means slowing the alarming statistics about the stripping of trees and timber from the Amazon and other tropical forests that serve as home to much of the worlds’ biodiversity. Every six seconds, a swath of primary rainforest equivalent to about one soccer field was destroyed during 2019, according to Conservation International, and more than half the world’s tropical forests have been wiped out since the 1960s. 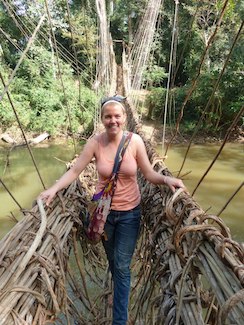 In the forests of Guinea, Brittany Williams crosses a suspension bridge.

“One of the biggest reasons for deforestation worldwide is commodity production” for international and domestic markets, Williams said. But on an individual level, ordinary citizens can make personal choices to join a growing movement to combat deforestation, “through your wallet and the ballot box,” she said.

The major commodities causing deforestation include palm oil, soy, timber, paper, beef and leather, which are present in over half of products in supermarkets, according to Forest 500, a project of Global Canopy, which tracks financing of commodities linked to deforestation and creates company rankings to hold them accountable.

Much palm oil comes from Indonesia and Malaysia, where producers create plantations in destroyed rainforest--host to orangutans, big cats, rhinos and elephants, Williams said. Other big contributors to deforestation are cocoa, largely grown in West Africa, often with human and labor rights issues, and coffee as well.

Curbing your consumption of red meat and these other products can help, said Willams. So can petitioning or writing to companies, as some are starting to listen. “Do as much due diligence as possible and demand that if I’m going to keep buying this, I want zero deforestation in your supply chain,” she said. 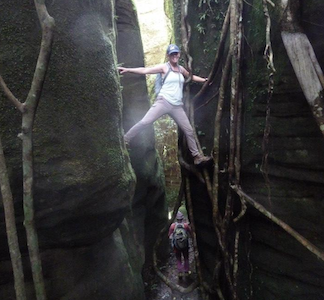 In the Kokoulo River valley in Guinea, Brittany Williams hiked with a local guide.

On a larger political level, a sea change is still needed, Williams said. Fortunately, the United States has laws to prevent import of illegally logged timber, but lacks legislation to stop import of other commodities produced through deforestation. Williams suggests “being really vocal and demanding change in all spheres of our society, telling your rep that you support forest and ecosystem protection around the world and here.”

On the international level, Williams helps develop guidance and strategies for countries around the world to reduce deforestation, to restore degraded forest landscapes, and to quantify and reduce emissions caused by land use change. 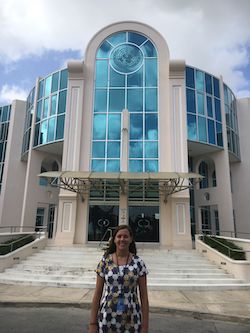 At United Nations headquarters for Barbados and the Eastern Caribbean, Brittany Williams worked on a climate change project.

In a report last year written by staff from United Nations, WWF, and Climate Focus, an international advisory company and think tank, she contributed to work assessing these targets, which will likely be discussed at the upcoming United Nations Climate Change Conference in Glasgow in November. She also recently co-authored a blog about how the 2015 Paris Agreement can continue to guide countries on climate actions.

Before joining World Wildlife Fund in 2019, Williams worked on an international agricultural development program under the United States Department of Agriculture (USDA) Foreign Agricultural Service, and was a climate policy intern for the United Nations Development Program. She holds a master’s degree in environmental management from Yale School of Forestry and Environmental Studies, and bachelor’s degrees in environmental policy, and international development and economics, from University of California, Berkeley. 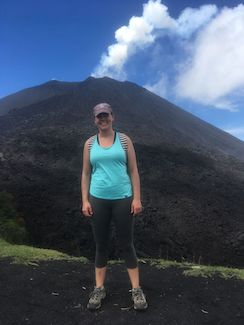 Growing up in Northern California, Williams said she always had an appreciation for nature, animals, and travel, and wanted to fuse those interests.  She said that her Peace Corps service in agriculture and environmental education from 2011 to 2014 helped deepen her passion and give her practical experience in sustainable development.

“We are part of this ecosystem,” she said. “Sometimes our systems have destructive results, but being able to go out for a walk, hike, bike ride, or (visit a) park and support that system of land stewardship is a great way to remind ourselves of what we’re all fighting for.”