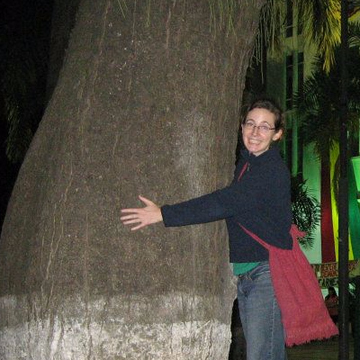 [A version of this blog appears in the Fall 2017 issue of WorldView magazine, published by the National Peace Corps Association.]

None of the Bolivian farmers I worked with as a natural resources volunteer ever mentioned climate change. They said the rainy season started later every year, dry seasons were dryer and dryer, there used to be more shade trees and windbreaks, there’s not as much water as there used to be, and an increase in hail storms and disease has lowered their peach crops.

Climate change is complex and it’s hard to predict its impact in the Andes.

However, we can make some assumptions: high elevations will warm to a greater degree than the global mean warming and we expect the changes in oceanic circulation, extreme meteorological events, and precipitation anomalies to severely reduce water supply. Some of these predictions have already come true: In 2009, the 18,000-year-old Chacaltaya glacier disappeared six years earlier than predicted; water levels of Lake Titicaca, which supports 2.6 million people, dropped by 2.6 feet, the lowest level since 1949; And the rainy season in the high plains has been reduced from six to three months.

People in the Andes face lower food production and increased prices as climate change and its effects contribute to decreased crop species diversity, land degradation, environmental changes, and increased population pressure with its attendant poverty and internal migration. Most of the hardship will be borne by farmers with only a small plot of land.

They may not call it climate change but it does not go unnoticed there. How farmers perceive their environment is an indicator of seasonal climate variability. Communities can respond to challenges by taking specific actions such as adjusting their herd sizes, diversifying sources of income, and acquiring usage rights to higher elevation land. They can adopt new modern crops and agricultural techniques or try to recover traditional strategies. A recent study reports that those homes with significant ethnic knowledge of traditional farming practices incorporating ritual and Quechua language maintain greater diversity in their fields, planting tens of different types of potatoes, for example. This may indicate that the preservation of Andean culture could preserve genetic diversity and mitigate the effects of climate change.

Farmers in the Andes can and do pursue strategies to mitigate climate change through their own societal ethics and social structure with traditional indigenous knowledge, respect, and diversity. With our language training and sensitivity to local cultures, Peace Corps Volunteers are an integral force against climate change in the Andes. These first-hand field experiences build in us a lifelong commitment to reducing the impact of climate change worldwide.

Ellen Arnstein taught classes in solid waste management, tree biology and English and started two schoolyard nurseries and a vegetable garden while serving as a Peace Corps Volunteer in Camargo, Bollivia from 2007-2008. She now supervises volunteer stewardship projects for the Emerald Nature Conservancy in the parks of Boston.