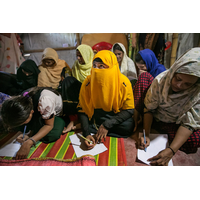 This New York Times article of December 28, 2019 from Nicholas Kristof states that This Has Been the Best Year Ever.  Do you agree or disagree?

In this op-ed he focuses on gains improving human lives all over the world in many areas Peace Corps Volunteers know a lot about -- education, poverty, hunger, etc. Let's also recognize Greta Thunberg going Twitter-to-Twitter against Trump to defend the planet and coming out ahead, and on the cover of Time magazine.

If you’re depressed by the state of the world, let me toss out an idea: In the long arc of human history, 2019 has been the best year ever.

Perhaps the greatest calamity for anyone is to lose a child. That used to be common: Historically, almost half of all humans died in childhood. As recently as 1950, 27 percent of all children still died by age 15. Now that figure has dropped to about 4 percent.

“If you were given the opportunity to choose the time you were born in, it’d be pretty risky to choose a time in any of the thousands of generations in the past,” noted Max Roser, an Oxford University economist who runs the Our World in Data website. “Almost everyone lived in poverty, hunger was widespread and famines common.”

But … but … but President Trump! But climate change! War in Yemen! Starvation in Venezuela! Risk of nuclear war with North Korea. …

All those are important concerns, and that’s why I write about them regularly. Yet I fear that the news media and the humanitarian world focus so relentlessly on the bad news that we leave the public believing that every trend is going in the wrong direction. A majority of Americans say in polls that the share of the world population living in poverty is increasing — yet one of the trends of the last 50 years has been a huge reduction in global poverty.

The proportion of the world’s population subsisting on about $2 a day or less has dropped by more than 75 percent in less than four decades.

Every day for a decade, newspapers could have carried the headline “Another 170,000 Moved Out of Extreme Poverty Yesterday.” Or if one uses a higher threshold, the headline could have been: “The Number of People Living on More Than $10 a Day Increased by 245,000 Yesterday.”

Many of those moving up are still very poor, of course. But because they are less poor, they are less likely to remain illiterate or to starve: People often think that famine is routine, but the last famine recognized by the World Food Program struck just part of one state in South Sudan and lasted for only a few months in 2017.

Diseases like polio, leprosy, river blindness and elephantiasis are on the decline, and global efforts have turned the tide on AIDS. A half century ago, a majority of the world’s people had always been illiterate; now we are approaching 90 percent adult literacy. There have been particularly large gains in girls’ education — and few forces change the world so much as education and the empowerment of women.

You may feel uncomfortable reading this. It can seem tasteless, misleading or counterproductive to hail progress when there is still so much wrong with the world. I get that. In addition, the numbers are subject to debate and the 2019 figures are based on extrapolation. But I worry that deep pessimism about the state of the world is paralyzing rather than empowering; excessive pessimism can leave people feeling not just hopeless but also helpless.

Readers constantly tell me, for example, that if we save children’s lives, the result will be a population crisis that will cause new famines. They don’t realize that when parents are confident that their children will survive, and have access to birth control, they have fewer children. Bangladesh was once derided by Henry Kissinger as a “basket case,” yet now its economy grows much faster than America’s and Bangladeshi women average just 2.1 births (down from 6.9 in 1973).

Yes, it’s still appalling that a child dies somewhere in the world every six seconds — but consider that just a couple of decades ago, a child died every three seconds. Recognizing that progress is possible can be a spur to do more, and that’s why I write this annual reminder of gains against the common enemies of humanity.

Climate change remains a huge threat to our globe, as does compassion fatigue in the rich world, and it’s likely that we will miss a United Nations target of eliminating extreme poverty by 2030. Meanwhile, here in the United States, Trump presents a continuing challenge to our institutions, and millions of families have been left behind and are struggling. We should keep pressing on all these fronts (the last one concerns me enough that it’s the topic of my new book), but we’ll get a morale boost if we acknowledge the backdrop of hard-won improvement.

“We are some of the first people in history who have found ways to make progress against these problems,” says Roser, the economist. “We have changed the world. How awesome is it to be alive at a time like this?”

I also take heart from the passion so many — especially young people — show to make the world a better place. I recently published my annual “gifts with meaning” guide and suggested four organizations to support in lieu of traditional presents. Readers have so far donated more than $1.6 million to those organizations, saving and transforming lives at home and around the world.

So I promise to tear my hair out every other day, but let’s interrupt our gloom for a nanosecond to note what historians may eventually see as the most important trend in the world in the early 21st century: our progress toward elimination of hideous diseases, illiteracy and the most extreme poverty.

When I was born in 1959, a majority of the world’s population had always been illiterate and lived in extreme poverty. By the time I die, illiteracy and extreme poverty may be almost eliminated — and it’s difficult to imagine a greater triumph for humanity on our watch.